By Sylvia Allen on August 15, 2020 in Excerpts, Like Light From Stars, Spoken word

Hi, friends. I’m back! Sorry for not posting for so long.

This is the transcript of a spoken-word story I told at a Voices for Change concert last year, posted here now by request. The characters are Lily and Ezra of Like Light From Stars, and the story is from a teenaged Lily’s point of view, at Ezra’s bar mitzvah. 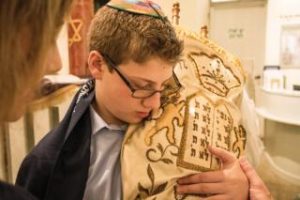 My little brother Ezra, age 13, wrapped in his new blue-and-white prayer shawl, stood on the bima in front of the congregation and gave his bar mitzvah speech. It was 1998, and below his yarmulke you could see his hair carved into those lines that were hella cool back then.

I had a rule for myself about not going to services, not with our mother anyway, but Ezra had actually cried when I told him I wasn’t going to his bar mitzvah, and I didn’t want anyone accusing me of being a bitch to my little brother. My bestie Martin Milne and I sat with our high school friends near the back, while Mama and Frances and Aunt Chloe went down and sat near the front.

“My Torah portion is Shoftim.” Ezra’s dark eyes burned into us from the bima. He wasn’t reading from his notes. Could he have memorized his speech? Hard to imagine him doing that. “I read in Shoftim,” he said, “about the City of Refuge. In those times in Israel, you killed somebody, even by accident, their brothers’d come and kill you. And then your cousins would go kill them. Back and forth, on and on. It was a lot of killing.” He frowned at the congregation and shook his head. “That wasn’t right.” I realized then—he was rapping! Kind of, anyway. I bet he was hearing beats in his head. He didn’t seem nervous at all, just completely into what he had to say, and happy to have so many people listening to him.

“So they set up this special City of Refuge where you could live, if you killed somebody, and their relatives couldn’t come in there and kill you back. You could live there, and be safe. But the thing is—you couldn’t leave. Ever. You could never go home. That sucks.” He stared out at us for a moment, hurt and outraged.

“Think about that,” he said now, from the bima. “You could never go home.” Martin, sitting next to me, 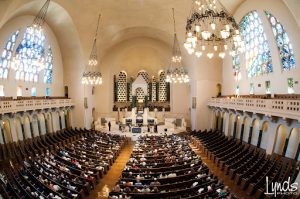 All those judging grownups

pretended to fall asleep and snore just then, and somebody else giggled, but I found myself impatient with them, wanting to watch Ezra. He seemed completely fearless and serious about what he was saying, up there in front of all those judging grownups and kids. I was proud of him. But even more, I suddenly wanted to cry myself, because you could tell, watching him and listening to him, that he was never—ever—going to be a normal guy. My heart ached. My little brother.

“And it was an accident. You didn’t mean to kill anybody. Maybe you could have stopped it if you realized. But you can’t always tell what’s going to happen. Everybody makes mistakes sometimes. If the mistakes you make don’t end up bad, well then you’re lucky.”

I should tell you that, years later, Ezra made mistakes that did end up bad, and he became homeless, wandering from city to city all over the Northwest, trying to find refuge. He was dirty and cold and hungry, and we were lucky to hear, from time to time, that he was still alive. He never came home again.

But now he was 13, a boy making a speech on his special day, with me, his sister, watching from the back of the congregation. “The City of Refuge,” he said. “That was better than everybody killing each other forever. But I think it was harsh. Too harsh. You could never. Go. Home. In my opinion—” He sighed deeply, looking out at the congregation. “They needed to think of something better.”

One Response to Bar Mitzvah