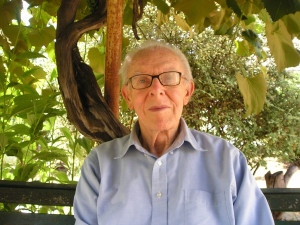 My father wasn’t a good dad; nobody would argue with that. However, a sharp blow to his head in old age improved our relationship. Here I am, after all, posting a photo of him on Father’s Day. The memory I wrote about below is one I later incorporated into the fictional characters’ lives in Like Light from Stars:

Several years ago my father, in his 80s, had a traumatic brain injury and we brought him up here, to St John’s, so I could look after him. We put him in the care facility by Pier Park, about a mile from our house. I could ride over there on my bicycle almost every day and hang out with him for a while.

My father, Pete, had been a fiercely intelligent man and a trad jazz musician, a bass player. Now his memory was completely gone. He didn’t remember five minutes ago. He didn’t remember that he had kids, or had ever been married. He didn’t remember his mother. For him, I wasn’t his daughter but the nice lady who came and took him for walks and listened to his sorrows and confusions. Waiting for me to show up, he would go to the nurse’s station many times every day and complain, “Where is my— my— person?”

On weekdays I’d go over there late, after work and after Pete’s dinnertime. I’d ride along the edge of the Rivergate truck highway in the dark, my headlight’s beam showing me the weeds, gravel, and bits of glass collected on the shoulder. I would turn into the little road, pass the Toyota upper lots, and coast into the home’s parking lot. My bike light would briefly light up the windows of the residents’ rooms one by one, Pete’s among them. When I walked down the hall to Pete’s room, he would be standing outside his door waiting for me. “I saw your light,” he would say. Every time.

Once, not long before Pete died, I had to go over there late at night to bring some meds that had been sent to my house instead of to the home. It was a dark September night, new moon, no clouds. The highway was quiet with no trucks roaring by. I could hear frogs singing in the weeds in the empty lots. I drifted into the parking lot, and my wavering headlight showed me Pete standing outside the door of the home, fully dressed, waiting for me. He should have been asleep, it was four hours past his bedtime. “I saw your light,” he said.

I still don’t know what he was doing out there, but when I think of Pete it’s usually this image of him standing there in the middle of the night in the dark parking lot, waiting for me, his hands in his pockets, the dim beam of my bike light glancing off his belt buckle, his shirt buttons, and the bottom rims of his glasses.

Get the Book Published
Those Historic Gay Marriages

One Response to Father’s Day and a Bike Light