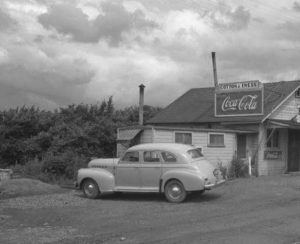 Research: What bar would it have been?

I am doing research for my next book.

Like my completed book, _Like Light from Stars_, this story takes place over multiple generations in a place with which I am familiar—in this case, St. Johns, where I have lived since 2005. However, that is not exactly several generations’ worth. I need to find out a tremendous amount about what it was like to be a child or a teenager or an adult here in 1945, in 1965, in 1995, and moments in between.

Masses of details! What buildings were there in each year. What did the street look like then. When was it paved, and how. Where did people work. What shifts did they work. What music did people listen to. What did people talk about in the bar. What restaurants were there, and what kinds of people went to each one. What did boys do after school. What did girls do. What color were the weeds in the empty lot. What did an old woman wear. What about a young woman who wanted to flirt. What about a small boy. What could you hear from your yard. What times did the trains come by. How did the sand smell, down by the cove.

I had been wondering: If a child was left to sit in the car outside the bar in St. Johns in 1964 while the father went in and had a few, what bar would that have been? Then on our community Facebook page someone posted a godsend—a photo of an unremarkable wooden house alone on a gravel road in a vast, desolate, windswept-looking landscape. The building has a Coca-Cola sign, gauze curtains in the windows, and two rusty-looking vent pipes, one of them leaning noticeably to one side.

The bar was on the road you would take to return to St. Johns from the dump. It was called the Blow Fly Inn. 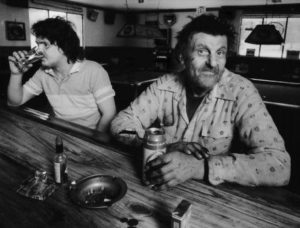 Research at the Blow Fly Inn

Metaphor and Dementia: Dancing in the Sky
Maybe It Never Happened

One Response to Research at the Blow Fly Inn