I grew up not allowed to sing.

My father was a jazz musician all his life. He started playing professionally when he was 15, and was still doing that two or three weeks before he died, at age 86. He was a perfectionist, very critical, highly respected in his community, the west coast traditional jazz community. He was also selfish, indifferent to the feelings and needs of others, interested only in his music and in his own comfort. His anger was terrifying to witness and none of us ever wanted to set him off. My mother was afraid of upsetting him, always anxious to keep him comfortable. She was the one who taught us kids not to make any noise. My father couldn’t bear any sounds that he didn’t make, sounds that weren’t up to his high standards for music. My sister and I were silent children. We certainly never sang, not ever, not in our whole lives, not even when completely alone, not in the shower. Not one note. When I went to a birthday party and everybody sang happy birthday, I would mouth the words, pretending to sing. My sister, in her 60s now, to this day never sings. She never has.

I began to sing some years after leaving home, when my best friend nagged me into it, patiently, over the course of many months.

I love to sing. Turns out I have a really nice voice. It’s my father’s voice, ironically, warm and full and sweet. I’ll never be good at singing though. You know how you never learn to speak a language fluently unless you learned it as a child? You’re not a native speaker. It doesn’t come easily. It doesn’t flow. In that same way I’m not a native singer. I’m slow and awkward at it. It takes me forever to learn to sing a song. Under pressure I slide out of tune. But I love it anyway.

For years, until Covid, I was a member of our local women’s choir. It was my therapy, my weekly ritual. It was my girl gang. We stood in a circle in that musty, cluttered, too-small rehearsal room, looking intently at each other’s faces and singing into that space between us. We watched each other’s body language for that moment of taking a breath, listened for that moment when the harmony was a perfect chord, full and bright, and we were one thing, one sound.

We sang for each other, on those rehearsal nights.

We gave several concerts around our little town every year. We always did at least one at Assumption Village, the Catholic care facility here in our town. The building had been converted from a 100-year-old church. The space where we sang had very high ceilings and there was a balcony halfway up. It was always a little too warm at the village, and the flat smell of institutional dinner drifted down the hall to where we stood. Our audience would be some of the Assumption Village residents who came and sat in rows of chairs that had been set up for them.

And then there was the man with the bunny ears. 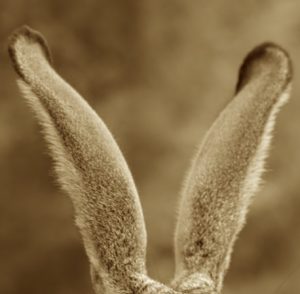 He sat alone, far above us in the dim balcony. He wouldn’t ever come down and join us but he was always there, looking over the railing, with his face in shadow and his large, somewhat shabby, gray-brown bunny ears tilting forward into the light. I was content to admire him from afar, but one of the other choir gals went up and talked to him once. He told her that he was too shy to come down and sing along with us, as the other residents did, but that he loved to hear us.

He didn’t mention the bunny ears, so she didn’t either. On those nights, we sang for him.

Until a few days ago there was a stack of paper on the corner of my desk that I have been avoiding for two years. It’s my copies of the sheet music from choir, about five years’ worth.  At first, soon after Covid began and choir closed down, I thought, we’ll be back next month. Then it was, maybe in the fall. Then, maybe next year?… Then next year came, and—I don’t know. Will there ever be a time when it’s safe for us to sing together? Probably not for me, anyway. I’m medically high risk for Covid and can’t safely even be indoors with anyone, much less stand in a room where everybody is singing. I don’t know, now, if Covid will ever be at a place where I could do that again. And anyway, our beloved director has moved on to other things, and we, our tight-knit choir, have drifted apart and dispersed into other lives, the kinds of lives that Covid allows. And that doesn’t include choir.

I avoid looking at that stack of music. You can’t sing choir music alone. 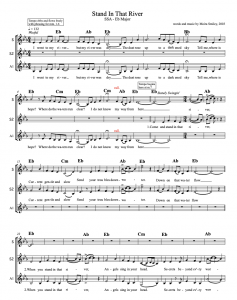 The stack of paper is heavy, cold, and dusty. Here’s On Children! That was such a great song. We sang it at a lively tempo and it was enough to get a congregation of Lutherans on their feet and dancing in the aisles. Here’s Stand In that River. When one of us was in distress, we could stand in that circle in that shabby rehearsal room and hold hands and sing that song to each other, the different voices weaving under and over and flowing downstream together. And there’s Joan Zymko’s Here, full of the sound of wild geese high overhead, and the taste of persimmons. I had the solo, some nights. It was short, but hauntingly beautiful.

The other day, I picked out a few songs that I could maybe sing on my own. The rest of the pile went in the recycling.

It was like finally clearing out the clothes when someone has died.

Sylvia Allen is the author of the forthcoming book _Like Light from Stars_, which follows seven generations of the same family in San Francisco, her home town. She is a technical writer who now lives in St. Johns, Portland, OR with her wife, Martha Shelley, and has a large backyard farm. A member of Willamette Writers, she has published articles on very diverse subjects, including the design of online knowledge bases and how to communicate with people with advanced dementia. At various times in her life she has worked as a cutter in a garment factory, a meeting facilitator, a user interface designer, and a printing press operator for the International Workers of the World.
View all posts by Sylvia Allen →
Bar Mitzvah
Chocolate