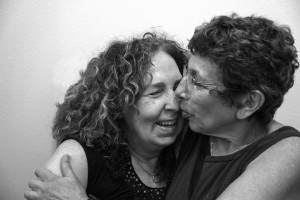 I’ve told Martha, “I’ll marry you as many times as it takes.” I guess we’re done getting married now. Here’s a story I wrote about those historic gay marriages in San Francisco in 2004. A version of it was published in Bad Subjects that year.

I heard about the San Francisco same-sex marriages on a Thursday afternoon in 2004 when it came out on the news. Martha and I were both working at home. She shouted from her office in the next room: “C’mere! You gotta see this!” She was looking at the photo everybody would see again and again for the next few days: Del Martin and Phyllis Lyon holding hands while Kate Kendall wept behind them.

Del and Phyl: Together for 51 years, and brave pioneers, as my Martha was, of gay liberation. They had just been married by the mayor of San Francisco, a completely unexpected bit of activism in defiance of state and federal laws that denied marriage to same-sex couples. The city went on to issue licenses to 117 other same-sex couples before the offices closed for the day. Right-wing organizations were suing to stop them, but in the meantime the marriages would continue on Friday.

“So should we go?” Martha asked.

Martha and I had had our legally sanctioned wedding years before, in Tilden Park. We had later become domestic partners in California. Then we had gone to Vancouver BC and gotten legally married, though that meant nothing where we lived. We were busy that Friday, and it was raining, and there would be long lines, but we had assumed that we would never see legal marriage in our own country, not in our lifetime. Of course we would go.

Martha opened the heavy, ornate doors of City Hall, and the noise hit us like a high school cafeteria at lunchtime. We crossed the lobby and had our first glimpse of that long, long rope of happy couples that tied the chaos of this day together. We walked back along the line. Pairs of middle-aged women like us in jeans and sweatshirts shouted excitedly into their phones. “Guess what, sweetheart,” one of them was yelling as we passed her. Young men in tuxedos with roses on the lapel swapped stories with gym-toned 30-something women in suits. Children ran and shrieked. Hundreds of voices bounced and echoed off the marble walls.

We threaded our way back, and back, and back along the line, in and out of cold hallways, around the rotunda under City Hall’s famous gold-trimmed dome. We passed two bearded men, each carrying an infant in a pouch. We passed a lot of strollers. People were eating sandwiches, holding paper cups of coffee. A couple of women had brought folding chairs to sit on. We got in line. Ahead of us was a pair of rosy-faced fat young women, both in white satin wedding dresses. “Mom?” one of them said into her phone, “Guess what?” Martha and I had discussed dressing up, but in the end we had focused on the probability of waiting in long lines on a cold wet day, so we just wore warm, casual clothes.

People who were at City Hall on other business had to cut through the line to get in and out. One woman wearing a red suit and carrying a briefcase crossed the line right in front of us. She stopped, turned, and shouted back, “Congratulations, all of you!” She had tears in her eyes.

I went out to the lobby and found a relatively quiet corner so I could call my sister. “Guess what?” I said. The line crept forward, a few feet every ten minutes. The hallway we were slowly traversing was dimly lit and rich with marble and polished bronze.

Every few minutes we heard an enormous cheer from the direction of the rotunda. Eventually, as we came around to the front, we saw that several weddings were taking place at once, up and down those majestic marble stairs. Each time a wedding concluded, everyone in line would whoop and cheer as if it were the only one. Reporters and video cameras bustled in and out.

Our line left the noisy rotunda, went down some stairs, and twisted around the labyrinth of corridors in the basement. A clerk came through and handed each couple a ticket with a number. “Hold onto this,” he said. “If you don’t have it, you don’t get your license.” Word came down the line that a judge had refused to stop the marriages! He said no irreparable harm was being done. So for now it would continue. This was Friday afternoon. Then there would be the weekend, then Monday was the President’s day holiday, and then another hearing was scheduled for Tuesday morning. At that hearing, we all knew, the marriages would probably be stopped. Adding it all up—there wouldn’t be time. Martha and I would not be getting married. Not this year, not in San Francisco anyway. Still, we didn’t consider giving up and going home.

At closing time, we heard that the County Clerk’s office had decided to stay open an extra hour. With luck, we might just get the license today. Two clerks came along checking and initialing each couple’s application. We slowly made our way back up the basement stairs and emerged into the North Light Court, with its immense skylight made of hundreds of small panes of glass. As we left that room, another pair of clerks checked everyone’s papers. We felt as if we were crossing borders in a war zone.

In the gallery outside the North Light Court, a pair of beaming gray-haired men came strutting back along the line, one of them waving a piece of paper over his head—their new marriage license. The whole line cheered and clapped. Each couple that passed us, returning from the County Clerk’s office license in hand, was applauded by the rest of us still in line.

A group of eight or ten Japanese men with cameras passed through the line, looking very puzzled. The word came along that the city had decided to open the offices all weekend, to perform as many marriages as possible before the hearing. We turned a corner. Finally, after all those hours in line, we could see the County Clerk’s office at the end of the hall.

I expected the people staffing the counters to be harried and crabby, but they seemed almost as thrilled as we were. We heard afterward that all of these clerks, and the others who had checked our documents, and the extra guards on duty at the doors, and the dozens of officials performing marriages all over City Hall that day, were volunteers—city employees who had chosen to be there to participate in the city’s enormous act of civil disobedience.

As we passed back along the line, waving our license, the waiting couples clapped and whistled and cheered.

On the second floor, where the weddings were being performed, we emerged from the elevator into more noise and high spirits. There was a line up here, too. We could see four weddings taking place below us on the grand marble staircase, three at the top of the stairs, and one in every alcove of the gallery around the rotunda. As each wedding concluded, whoever was officiating would come to the head of the line and take the next couple. Some of the officiants wore judges’ robes, some were in business suits, and some were dressed casually.

We arrived at the head of the line. An elderly Chinese man in a long black robe came and led us to an alcove overlooking the stairs. He leaned toward us so we could hear him in the pandemonium. “I am Marriage Commissioner Richard Ow,” he said. “I’ve been doing this for 30 years.” He smiled a little V-shaped smile. “This is a wonderful day.”

We said “I do.” Commissioner Ow pronounced us each “husband and wife, spouse for life” to the other. The old man signed our license. We shook his hand and stepped aside for the next wedding.

Back downstairs, we stood in another line for the Recorder’s office. Several counters and folding tables had been converted to temporary marriage registration stations. A clerk came in and announced to the room, “She’s going to keep it going through Monday.” It was now very late, and these clerks looked as though they’d been hit with a board. They just kept working, heads down. Finally, one of them placed in our hands a pink and blue marriage certificate stamped with the Great Seal of the State of California.

When we left City Hall the lines were still twining up and down the corridors and weddings were still happening on the grand staircase. We heard later that City Hall didn’t close that night until all the people with numbered tickets had been married.

Outside, the rain had stopped and the sky was dark, dark blue.

For once—finally—for however long it lasted in San Francisco, our marriage was as real, as solid, as serious, as substantial as anyone else’s. And we had the paper to prove it.

Holding hands on the train home, we couldn’t help telling the two nice suburban moms in the seats across from us that we had just gotten married, at City Hall. We pulled out our stamped, signed, pink and blue certificate and showed it to them. “Awwwww,” they said, smiling. “That’s so sweet.” “So sweet.”

All of these marriages were annulled six months later.