By Sylvia Allen on November 2, 2018 in Getting published, Like Light From Stars, Sylvia Allen

I had a dream that standing in front of me was a tall pale person with a bird’s head and a long, pointed beak that curved slightly downward. It had black feathers or hair in that style that used to be called a mohawk, from the top of its head and falling down its back, and a simple, draped, off-white garment.

This person was holding in its right hand a square of cloth, about 18″ each way, like embroidery material but more pliable. The square was unevenly thick with rough material spread across it like forested mountains and valleys, and occasional tiny points of saturated color. The longer I looked the more diverse and colorful and complex the square became, with more numerous tiny flickering bits of brightness. I wanted it. 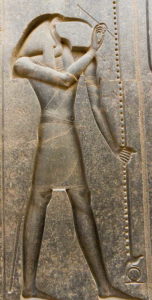 The dude with the bird head

The figure frowned at me, waved the square in my direction, and pointed to it with its other hand in an admonitory manner. Then I woke up.

I described this dream to Martha and she said the figure was the Egyptian god Thoth, who is in charge of writing. I looked it up and sure enough, that was Thoth. I guess I have been told to get off my duff and get to it.

It’s been some time. I’ve been busy, and have done nothing toward getting this book published. What is my life for? According to the dude with the bird head, it’s about writing my books, and getting them published.

All of which is by way of saying, I’m starting this blog up again. Please read it. Please subscribe to this blog. Please Like my writing page on Facebook. You don’t want Thoth coming after you.

3 Responses to Thoth Delivers a Kick in the Pants