Years ago, long before the advent of protease-inhibitor cocktails, a close friend of mine was diagnosed with Kaposi’s sarcoma, which in those days was an AIDS-defining illness—a death sentence. I felt helpless and horrified, unable to do anything for my buddy, but wanted to do something useful, so I volunteered at Shanti, a San Francisco organization that gave emotional and practical support to people with AIDS. My Shanti client, David, was sharp-tongued and witty, with a gift for conversation. Once or twice a week I visited him in his tiny apartment, did his shopping, and cleaned up some, and then we talked.

After a few months David began to forget things. Sometimes when I showed up as usual on Sunday, he was furious, accusing me of missing a week. I had never seen dementia before and didn’t recognize these early symptoms. A couple months later, though, he had developed the full range, including delusions and hallucinations. Like most people with dementia he became self-absorbed, unable to focus on others. He still loved to talk, but he wasn’t making much sense. He raved and rambled, he referred to events that couldn’t have happened, he didn’t remember five minutes ago. It was no longer a pleasure to sit with him. The bright guy I’d come to love was gone. Or seemed to be. 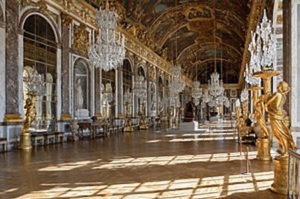 Then on one of my visits David told me he was getting lost in his apartment. “It’s so much bigger than I thought it was!” he said. “There’s all these rooms I’ve never seen before. Did you know they were there? Did you?” He went on to refer to hallways, salons, anterooms, elaborate furniture, even an elevator. Statues. Walls of mirrors. Vases full of peacock feathers. On and on. “It’s a palace!” he said. “Too bad I didn’t know about all this when I had more time to appreciate it.”

OH! This is when the light finally dawned. This was metaphor, of course. Where was this house? Inside him. David had always been charming and outgoing, and maybe a little shallow. Having lost the ability to focus outward, he was now forced to look inside himself for once. And what he found was a palace, not a shabby studio.

That’s one thing about writers: We are good friends with metaphor. Once I understood what David was doing, I decided that I should use the same language to answer him. “Honey, I knew your house was a palace, but I hadn’t seen most of those rooms either,” I told him. “It’s terrific that you’re finding them now. Tell me more.” We talked for over an hour, entirely in the metaphor of his house and what he was discovering. It was the best, most real and meaningful conversation we had ever had.

Leaving the Best Day Job Ever
Metaphors and Dementia: Dreams of Escape